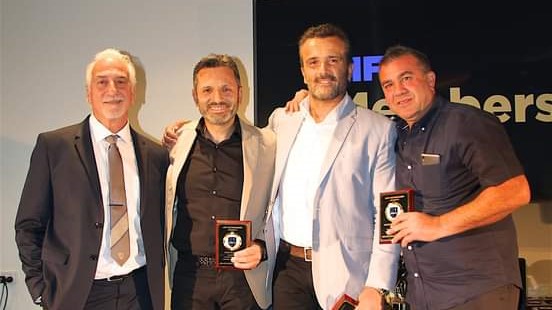 We would like to welcome our newest life members that were inducted into our group at our recently held Awards Night for season 2020.

Both these Bill and Evan commenced with the club in 1994 as inaugural players and have been involved with our club for most of the past 26 years.

There was a period where they were not directly at the club but once they got married and had children, they both enrolled their kids at our club at the junior level which meant a lot to us as they could have quite easily gone to more established clubs at the time. Bill’s son Apostolos is now playing in the A-League with Western United!

Bill and Evan have been involved with coaching, team managing, running the line, have been club sponsors, and Evan is a current board member.

Their loyalty and support over the past 26 years is very much appreciated.

In 2013 George played in the Adelaide Comets Amateur League and in 2014 received trophies for Best & Fairest and Players Player. In 2015 his team won the Championship along with players Kon Antoniou, Vangeli Katsambis, John Katsabis, John Politis, Elias Demourtzidis, Peter Thanos and Peter Nicou who are all members of our club.

During his time at the club George has always helped wherever he could with maintenance work and has donated his time to our club. In the past years George was also a referee within our 7-A-Side competition.