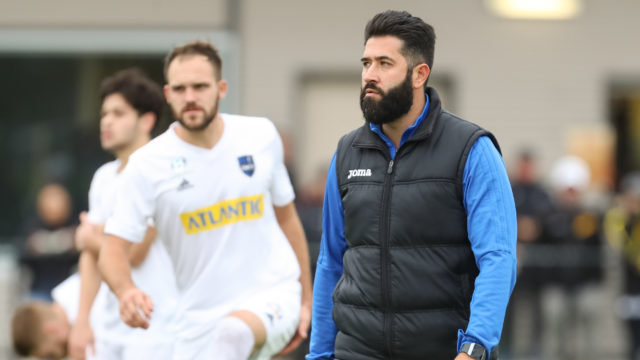 Within 4 days, Adelaide Comets Senior side has won and lost 3 points following a Round 15 win and a Round 13 loss.

Friday night, Comets hosted Adelaide Olympic in Round 15 at SA Athletics Stadium, leaving the venue with 3 points care of a 1-0 win. Tuesday night, back at home base, it was Adelaide United’s turn to leave as victors with their own 1-0 win in a Round 13 catch up match.

Senior Coach, Theo Tsiounis, acknowledges that both matches were set to be tough.

“Friday’s game was an even one in testing conditions,” he said.

“Last night was always going to be difficult – United have the best U21 players in the state.”

Notable additions to the squad from Friday night are Ibby Kamara (South Adelaide) and Mark Ochieng (Adelaide United), who Tsiounis is excited to bring in.

“Both Ibby and Mark provide balance to the team,” he told.

“They are great players and have integrated into the team well.”

Attention now turns to Saturday’s game against bottom ranked side, Sturt Lions. In both previous encounters with Sturt, Comets have come out on top – once in the League and once in the Cup competition, however Tsiounis is quick to insist that the match will be anything but easy.

“Sturt are very unlucky to be sitting where they find themselves on the table.

“They are a good football playing side and we will need to come prepared.”

Support Comets this Saturday in Round 16 of the National Premier League SA at Adelaide Shores Football Centre.