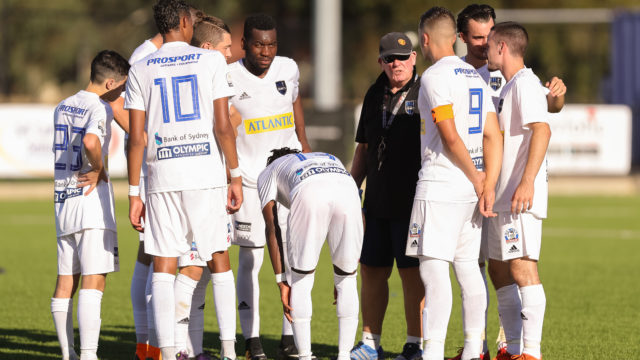 Adelaide Comets U20’s Coach, David Martin, has had an extensive football playing and coaching career that rivals most.

Having someone of David’s experience and knowledge involved with Comets is an exceptional compliment to the existing Senior Coaching staff.

Originally from Ireland, where he played football at various clubs, the most successful of which was Linfield in Northern Ireland, a club which in their history have won a record number of trophy’s.

“As a 17-year-old I was making my way from the youth team and became a regular in the open aged reserve team,” said David. “I missed selection in the Northern Ireland Schoolboys team that played in the British Home Championships. Over 500 boys tried out and I got to the last 25 before getting cut. My family’s immigration to Australia in 1961 put an end to my trials with Manchester United and Burnley – I had all the luck.”

While living in Whyalla, David played for Croatia Whyalla Soccer Club for 6 seasons, all of which were very successful.

“While attending Whyalla High School I played for the Wanderers first team at 15. The team was full of experienced ex Professional players from Britain and Europe and was a real learning and toughening up experience.”

It was at this stage that he became involved in Junior coaching.

In 1973-1974 David completed his Preliminary and Advanced Coaching Certificates (as they were known then) and made the move to Adelaide in 1975. The remainder of David’s playing career was with Noarlunga United, Raiders and U.S.C. Lion in the South Australia Premier League.

In 1980 David completed his Level 3 accreditation at Scotch College, conducted by the National Coaching Scheme, and since has been coaching continuously in various age groups from Under 10 to Senior State League. David also coached at State level with the South Australian Institute of Sport Elite Soccer Programme, which produced a good number of players for the Joeys and Senior National teams.

In 1998 David relocated to the Sunshine Coast in Queensland, immediately becoming in volved in coast soccer and working closely with the Directors of Coaching. Prior to leaving, David completed a Soccer Australia Coaching Instructors course and attained his Senior Instructors Licence.

On the Sunshine Coast, David was involved with the School of Excellence at Kawana as a Specialist coach, coached various Sunshine Coast TIS Representative age groups and in 1999 was appointed Senior Coach of Buderim Wanders Soccer Club.

For a period of 9 years, David was delighted to be involved with a number of promotional clinics at various schools around the Sunshine Coast, including the Australian and Sunshine Coast Paralympics soccer teams.

“The success of the Sunshine Coast Soccer Academies led to a substantial increase in playing numbers on the Coast and these annual academies continue to attract large numbers,” said David.

“I was then appointed the full time Football Queensland Regional Development Officer for the Sunshine Coast in 2002.”

It was in 2007 when David was offered a full-time position with Football Federation South Australia (FFSA) that he made the move back to Adelaide.

David conducted numerous coaching courses for Football Federation Australia and FFSA in the metropolitan and country areas, returned to representative coaching duties with the SA U13 team at the National Identification Championships and coaching the SA Paralympic team.

“One of the more rewarding experiences for me was coaching the SA Paralympic team in their first venture to the National Tournament in Melbourne, which acted as a Paralympic World Cup selection,” he said.

“Coaching players with varying degrees of disabilities is something I have been involved with in both Queensland and also South Australia. The evident and true enjoyment derived from being able to perform something new gave these kids and me a sense of real pride.

“The commitment they showed every week in training and at their first tournament at the National Paralympics in Melbourne was outstanding. A number of this group have since played for Australia in world Cups and International tournaments; great kids!”

Following his time with FFSA, a number of club positions became available over the seasons. These roles were predominately in a mentoring capacity developing younger coaches in NPL clubs.

At South Adelaide, MetroStars and White City, David worked with the Senior squads as an Assistant coach and in a mentoring role to Senior coaches. At MetroStars David held the Technical Director role with oversight of teams and coaches from U12’s to U17’s.

At present, David has a group of players from various clubs that he conducts 1-on-1 skill sessions with.

“I find the work with the individual players very rewarding,” he said.

“All of the boys are first rate with a great attitude and very focused.”
After so many years in coaching, David insists he still has plenty to enjoy and plenty to learn.

“In the early 1970’s, while still playing, I got involved in coaching at Primary schools in Whyalla. I enjoyed the fun aspects and the children efforts and the enjoyment they got out of the sessions. I travelled down to Adelaide on two occasions in 1973-4 to complete my first coaching certificates and the journey had begun.

“People ask me how I remember the kids over all those years – sad to say that I am coaching the grandkids of some of those players!

“The reason to keep being involved is simply to keep learning as a coach and to try to give young players the information and tools to be the best that they can be and not to miss out on the opportunities I missed. I believe that these opportunities come with hard work allied with commitment and the talent they possess.

“I don’t know enough about coaching yet to stop!”

A surprise call from Senior Head Coach, Theo Tsiounis, to assist with trials and set up a football programme at Norwood Morialta High School, led to the pair remaining in contact.

After speaking with Theo and Comets Director of Football, Doug Paterson, David became one of the Comets Family, coaching the Under 20’s side – who currently sit in second place on the League table.

“Doug convinced me that Comets are a fast rising, progressive club with a great focus on the future, throughout the club structure,” he told.

“I am immensely pleased to be involved with Adelaide Comets FC and for the acceptance and friendship shown to me by everyone involved in the club.

“People say that coaching a Reserve team is the hardest job. It can frustrate you at times, but as is the case with my current Comets squad the highs vastly outweigh the lows.

“The young Under 20 team is full of quality and fully deserve the position in their League and can actually consider themselves unlucky not to be leading the pack by a distance.

“The mind set of this team has been seen in occasions when they have raised themselves form a losing position to gain outstanding results. They believe that they can win every game and that’s what makes a champion team.

“I try not to highlight individual players for praise but Peter Kopsaftis has shown great leadership though out earning the respect of the players and myself. While all of the players fully deserve equal recognition for their outstanding efforts so far, a number continue to press for recognition into our Senior Comets team.

“Jordy Merlino amazes me with his skill, resilience and the impact that he can have on a game, defensively Everiste Lusikya, Christos Kotsiou and Andy Kantic consistently stand out. Coming down from Whyalla into a higher standard of intensity of training and games, Phil Cash has slipped seamlessly into this team and made a great impact.

“Every player deserves mention and as this is a young side, players like Lansana Smith and Tete Yengi can be confident of a successful time at Comets. To George Savvoudis and Thanasi Doupolis, everything depends on you two. Keep up the great work guys.”