The Adelaide Comets Soccer Club was formed in 1994 (as the Adelaide Raiders Soccer Club) by Jim Tsouvalas and seven close friends with the view to create a club with a family atmosphere. Already with a vision for the future, the founding Committee set themselves the objective to commence junior teams by the year 2000.

The original club logo was a shield style emblem depicting a Greek Spartan warrior is shown below. 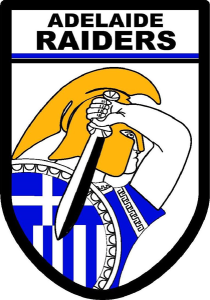 As Adelaide Raiders, the club won the South Australia Amateur Soccer League (SAASL) Saturday Division 2 Championship in its inaugural year and gained promotion to the SAASL Saturday Division 1 competition. In 1997, they also became Champions in Div 1. 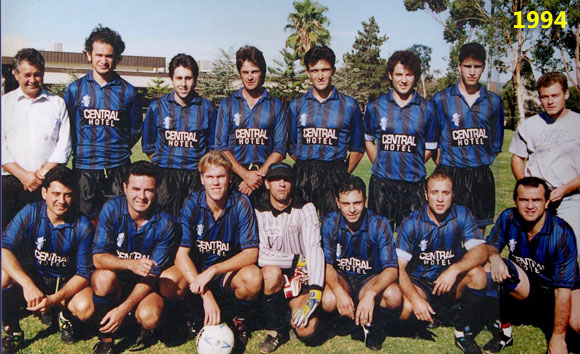 In 1999 we updated our logo to a circular design, and replaced the Greek flag on the warrior shield with our iconic Black and Blue stripes, as this was a better fit in with the diverse backgrounds of our players and members. 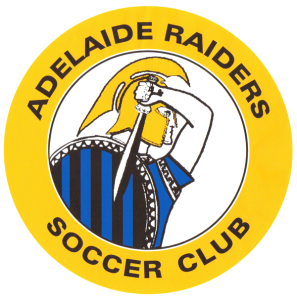 In 2001, the club registered 5 teams in the South Australian Soccer Federation’s (SASF) Junior Premier League. Achieving this goal was the catalyst for the club changing its name to Adelaide Comets, to avoid confusion with another federation soccer club, Adelaide Raiders (Formerly Adelaide Croatia Raiders).

Coinciding with the commencement of our Juniors, and the name change to Adelaide Comets, our current “Oval” logo was introduced. This was a radically different, modern yet simple logo.

During this time, the clubs senior team continued to enjoy success in the SAASL winning consecutive Championships in 2001, 2002 and 2003. This ongoing success at the highest level of amateur competition generated the push for a move to a higher league for the Adelaide Comets. The club made several attempts over a number of years to find a place for itself within the SASF competition with no success.

Finally, with the implementation of a new governing body for the sport in South Australia, Adelaide Comets entered the newly formed State League in 2006 under the banner of the Football Federation South Australia (FFSA).

In 2007, its second year in the FFSA State League competition, the club took out their first semi-professional Championship, coming first in the competition and earning promotion to the FFSA Premier League.

Since commencing in the FFSA competitions, the club has maintained a philosophy of striving for success and this approach has been rewarded by the performances on the field, and the clubs steady progression through the leagues. The culmination of this progression came in August 2011, when in its sixth year playing under the FFSA, the Adelaide Comets Senior Men’s team finished the season with a 1-0 win over Enfield City to finish top of the FFSA Premier League as Minor Premiers, earning direct promotion to the highest possible level in South Australian competition the FFSA Super League for the 2012 season.